Kellen Adams is hired as an assistant manager at a secluded resort on the North Pacific Coast. A former marine, she has a lot of secrets, including the fact that she doesn’t remember an entire year of her life.  Not long after taking over the resort, Kellen finds the former assistant manager’s mutilated corpse.  She has to solve this mystery, and it becomes quickly clear that the killer is still at the resort… 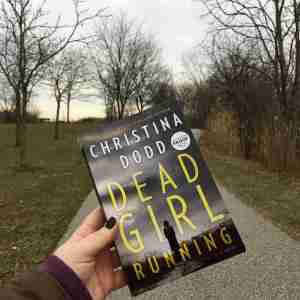 Christina Dodd deals with a lot of tropes in this book, which is both its strength and its greatest weakness. Dead Girl Running features a battered wife running from her past and a former marine with a unique mental ability.  But the catch is that both tropes are wrapped up in the same person.

Dead Girl Running doesn’t have much originality in its plot or characters (or even setting) aside from the fact that there’s a lot going on.  It seems like Dodd had about twenty ideas for a book, and rather than sifting through them and picking one or two to focus on, she decided to use them all.  This in itself isn’t a bad thing.  Using a lot of different character and plot ideas could work, but she stretches herself too thin.  The book has the bad-ass marines, the typical cozy mystery novel setting, a murder mystery party (which, sadly, was barely covered), spies, and the list goes on.

That said, there are a lot of characters in this book. They’re all very two-dimensional, since the book isn’t nearly long enough for Dodd to be able to flesh most of them out in any meaningful way.  I understand what she was doing – it was somewhat of an Agatha Christie-type mystery, and the killer had to have been someone in the resort—so she needed a lot of characters. But did she need that many characters? My answer is no, but it might depend on your perspective. Some characters barely get any screen time, and they’re typically stereotypes – like the womanizer pilot, the mysterious and elusive author, or the preppy yoga trainer.  That said, the logic behind why the killer had to have been someone on the island was faulty, and that was just one of many plotholes that took away from enjoyment of this book.

Kellen Adams has an interesting backstory and one of the strengths of the novel was the flashbacks. It was a brief respite from all the telling instead of showing.  For the rest of the novel, Dodd spends a lot of time telling the reader about various characters’ backstories and their personality characteristics, most of which was promptly forgotten as soon as I flipped the page. Kellen’s backstory, however, is one of the aspects that kept me reading. Past Kellen was more fleshed out, and she had a fascinating storyline that almost could have made up an entire prequel book.  I particularly liked how gradually present-day Kellen regained her memories over the last year.  Dodd executed this aspect of the story very well, even if it was buried in other the rest of the plot.

Dead Girl Running is relatively fast paced, aside from the myriad of characters and information dumps that slow the reading down.  It has a lot of plot twists, some of which don’t make too much sense, but they keep the plot plunging forward, so there are rarely any lulls in the action.  At approximately page 195 I realized that this book was meant to be a romantic thriller. If you’re interested in romance coupled with intrigue, this book isn’t for you, because the romantic interest is only introduced over halfway through the book.  The romance is a little forced, if only because of how quickly it had to develop.

This book started off at five stars, with one of the most compelling first chapters I’ve read in a long time. It then dropped off to three stars as dozens of characters with little to differentiate between them were introduced and the plot started to lag. It dropped down to two stars as the tropes became solidified and the ridiculous plot twists began to emerge.  Even the final twist at the very end of the book had me shaking my head in disbelief, since it was directly contradicting something that had happened earlier in the book.  Ending a book with a gigantic plot hole is not a good idea, since it caused me to fall into the abyss, and I’m unlikely to read another Christina Dodd book anytime in the near future.

*I received a copy of this ARC from HQN in exchange for an honest review.*