In There’s Someone Inside Your House, teenage Makani leaves her dark past behind in Hawaii and moves to a small town in Nebraska to live with her grandmother. It looks like her life is finally turning around.  She makes new friends and even has a budding romance with a mysterious loner named Ollie. But this Halloween brings a lot more than just dressing up and carving jack-o’-lanterns.  A serial killer is targeting students from Osbourne High.  Makani must find the murderer before he targets her or someone she cares about. 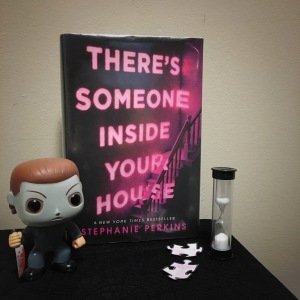 I was disappointed in this book. Marketed as being like the next Scream, which is one of my favourite movies of all time, I was expecting something scary, funny, and self-aware. Unfortunately, There’s Someone Inside Your House was none of these things.

This book isn’t particularly frightening.  The murders are gory and creative, but that isn’t the reason why I read a horror book. I read for the characters. I want to get lost in the story and genuinely fear for the lives of the people I care about. After reading this book, I realized that Perkins could have killed off every single character and I wouldn’t have cared. In fact, that would have possibly made it more enjoyable, if only in the sense that it would have been unexpected and deliciously disturbing surprise.

I’m a huge fan of Perkins’ other works – particularly Anna and the French Kiss.  I would have forgiven this book for not having a great plot and not being scary had I been invested in the romantic plotline.  Perkins spends so much time developing it, yet it fell flat to me. I did not care one way or the other if Makani and Ollie ended up together. It seemed like Perkins was trying too hard to make Ollie a lovable outcast, and he just ended up being a stereotype.

I wanted more about Makani’s friendships. I wanted to see more of her relationship with family. I wanted to see her go to school, interact with her friends and teachers, before the murders started.  I think Perkins needed to spend more time building who Makani is on a personal level, and less time building what her romantic relationship with Ollie was.

Spoilers between the glasses!

The killer ended up being someone that I only remembered being briefly introduced earlier. We found out who the killer was fairly early on, so I assumed there would be a twist or two before the end of the book. But there wasn’t one. I’d thought, since the book was compared to Scream, that maybe he had a partner, and that the partner was someone that the reader knew more intimately.  Nope.

Also, the reason why the killer was killing everybody was a little murky.  They had a few explanations as the story progressed as Makani and her friends tried to figure out why he was murdering people, but the explanations got more and more ridiculous. The final rationale was just as silly. Essentially, he didn’t want people moving on with their lives and leaving town after they graduated.  This explanation is unsatisfactory for me, and Perkins didn’t spend much time supporting this in the text.

The main strength of this book is the language. Perkins has a unique and engaging writing style, which unfortunately wasn’t quite strong enough to make up for the unlikable characters and uninteresting plot.

I honestly don’t think I can recommend this book.  The romance is unimpressive, and the mystery itself is not very engaging. This book is quite short and is a very quick read, so I will let you decide for yourself.

One thought on “Book Review: There’s Someone Inside Your House by Stephanie Perkins”