Carrie has had a difficult life.  She’s chubby.  Her mother is extremely religious. The girls at school bully her.  But Carrie isn’t like these other girls. She’s different, and on prom night, when her bullies take things too far, that’s when she’ll have her revenge…

This book review includes spoilers! Read on at your own risk!

I came into this book expecting it to be just like the movie. It does not disappoint.

Stephen King uses newspaper and book excerpts scattered among the narrative. It provides us with a sense of what’s to come, which uses some heavy-handed foreshadowing for the reader. While I’m already very familiar with the story–I’ve seen the Sissy Spacek version a million times (and even endured the remakes)–I can’t help but wonder what it would have been like to read this with absolutely no idea of what was to come.

Some have said that the writing in this book is a little boring. Having read parts of Stephen King’s other works, I have to say that I agree when you compare it to his later writing, but this book is fast-paced and has very interesting content.  If you’ve already seen the movie, however, this might ruin the anticipation of wondering what will happen, since the movie follows the book very closely. That said, there are several fascinating innovations in the writing. I love the way Stephen King has little interjections of thought within the text, undoubtedly meant to unsettle the reader.  He also does a great job of explaining how Carrie’s telekenesis works without overdoing it. He describes it as “flexing”, which was a quite novel way of putting it, in my opinion.

In the book, Carrie grins maniacally while she takes her revenge.  I absolutely loved the disturbing image this description evoked. The way Stephen King describes it sent chills up and down my spine. I would have liked to have seen Sissy Spacek perform that way in the movie. It would have made for a different experience, that’s for sure! I think that with her grinning, you realize that she’s enjoying what she’s doing. With the catatonic expression on Carrie’s face in the movie, however, you’re led to believe that she’s had a mental break and that she possibly can’t be held responsible for her actions. This is surely a different take on the idea!

The ending of this novel was quite chilling. I wonder if King ever had plans for a sequel somewhere down the line… 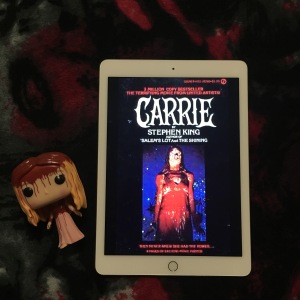 I recommend this book to anyone who hasn’t read a Stephen King book before, but is interesting in dipping a toe or two in the water. It’s a lot shorter than his other works, it’s almost exactly like the movie (with nothing totally unexpected), and it’s his first ever published novel.